The Elf on the Shelf

is my least favorite Christmas tradition. I will forever think horrible thoughts of the family who introduced my children to the insanity of the elf. I’m not even sure why my children have such high hopes for this mysterious, ever-watchful, spying little creature.

I guess it could be that their hopes for the tooth fairy have fallen short. The tooth fairy frequently drops their tooth money on the floor (way under the bed where only Mom can reach it), or she can’t make it because their teenage brother stays up too late and she can’t sneak in the house.

So, my kids are desperate for a fairy (even if he’s an elf) to bring pixie dust trails of magic to their home. But, alas, the elf is not much better than that silly tooth fairy.

Every morning I wake from a dead sleep panicked to remember if the elf has magically transported from the North Pole to another mundane position in our home.

The sweat drips from my brow as I stealthily make my way through the house – in the dark – to search for the insidious little creature. I have become Ninja-like in my reflexes as I peer up the stairs to confirm all children are asleep in their beds while avoiding shoes left in the middle of the floor.

In fact, some might say he just pops in wherever he lands and stays put for the remainder of the day. Sometimes that’s in the middle of the Christmas tree. Sometimes, it’s scrunched between knick-knacks on the counter. Rarely, is he found on an actual shelf.

The Trauma of the Elf on the Shelf

The trauma of having an Elf on the Shelf

is contained to only adults. Children love the idea of a tiny red spy lurking in their home ready to narc on them to the big guy at the North Pole.

Adults? Not so much.

Adults can not understand the complexities of the magical elf and are often distressed with nagging questions.

These are questions that keep adults up at night.

These are questions adults ponder when they are witnessing where the elf has chosen to place himself each and every morning.

In some houses, the elf is mischievous. Children wake to find a mini marshmallow fight between the elf and the Barbies.

In others, the elf is helpful and leaves children sweet reminders to brush their teeth.

But in our house, the elf is, well, boring.

He never manages to do anything mischievous and is rarely helpful. In fact, some would say he is complacent in his job duties. This year he was even late to our house by an entire week. But, he quickly returned to his role of ever-watchful North Pole spy.

A Week in the Life of Buddy, Our Christmas Elf (who sometimes sits on the Shelf)

Buddy has what, I will assume, is a tenured position. I’m pretty sure he has job security and is not required to perform such trivial job duties such as making snow angels in powdered sugar or setting up counter-top barbecues with the Teenage Mutant Ninja Turtle dolls.

His life is pretty serene, as is witnessed by a week in the life of Buddy.

Morning 1 in the Life of Buddy the Elf: 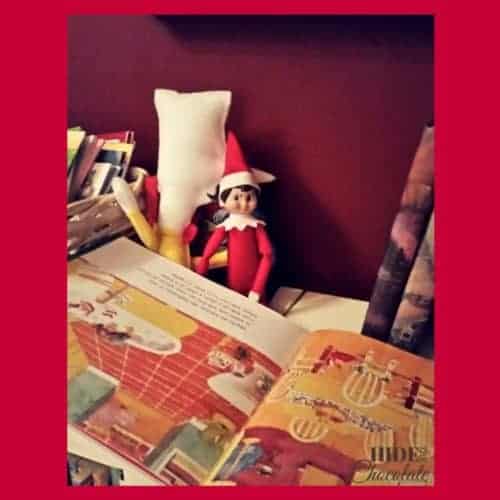 The smell of winter was in the air.

The Christmas lights twinkled and the magic of Christmas was crackling in the fireplace.

to Fred (our Life of Fred doll

). It set up expectations that were hardly fulfilled on Morning 2.

Morning 2 in the Life of Buddy the Elf: 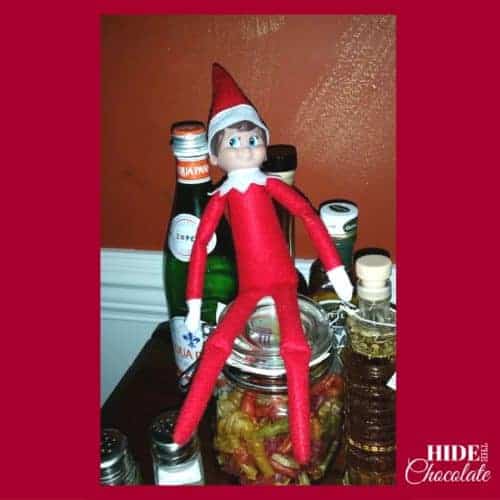 “Mom, Why is Buddy sitting on pasta?”

Umm, because he loves Italy, of course.

Morning 3 in the Life of Buddy the Elf: 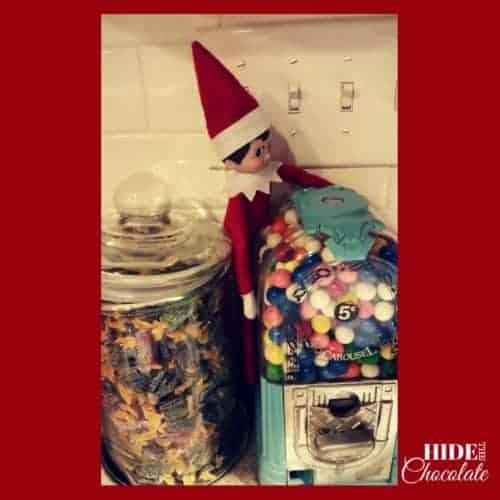 “Mom, Buddy looks like he’s trying to get into the bubble gum machine!”

Early Morning 4 in the Life of Buddy the Elf: 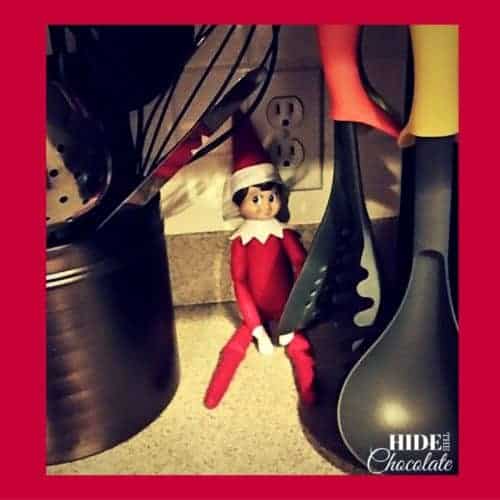 “Mom, we’ve looked all over, and we can’t find Buddy.”

Yeah well, if you’d stop chasing me through the house yelling “Where’s Buddy?” maybe you’d find him and no, I have nothing stuffed up my shirt.

Morning 5 in the Life of Buddy the Elf: 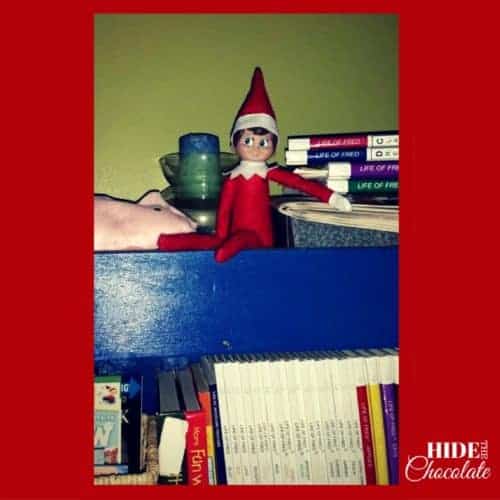 It was a late night lesson planning. Buddy seemed content to watch me from an actual shelf.

Morning 6 in the Life of Buddy the Elf: 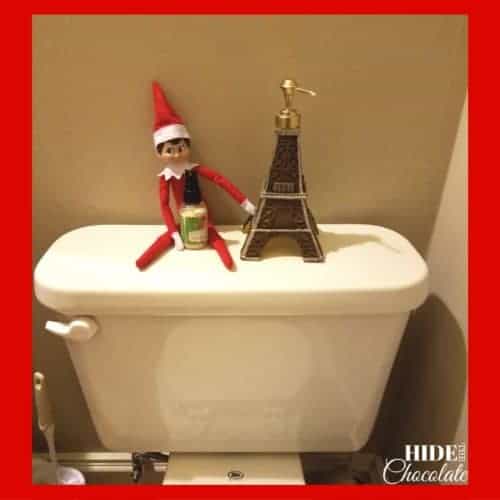 Buddy’s spot is a bit inappropriate, in hindsight. Most of the family chose to avoid using the hall bathroom on this day.

Morning 7 in the Life of Buddy the Elf: 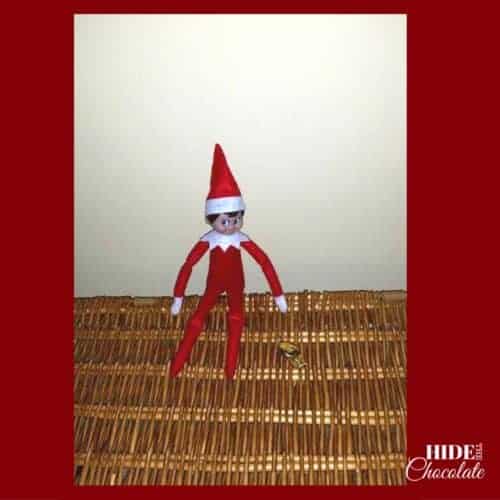 Well, it’s better than sitting on a toilet.

Even though the Elf on the Shelf is my least favorite Christmas tradition, it is a tradition that still lives at our house.

I won’t be able to enjoy the magic of Christmas through young, innocent eyes much longer. The kids are growing, and their ideas of magic are growing with them.

So, for now, Buddy and I will coexist… unless the dog decides otherwise.

What’s your least favorite Christmas tradition that is still celebrated in your home? 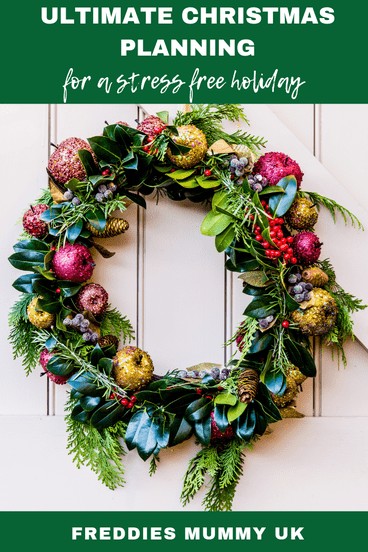