The oldest just graduated from high school. For the last year, while preparing for him to leave the nest and live on his own, my husband and I began to realize we may have failed him when it came to essential life skills he needed to survive. We spent 17 years educating him, providing for him, making sure he was well-rounded and knew how to play most sports. But, we failed him on some of the simplest of tasks that we took for granted.  Don’t fail your kids like we almost failed our son! Here are 10 life skills for teens who will soon have to navigate the world without their parents. 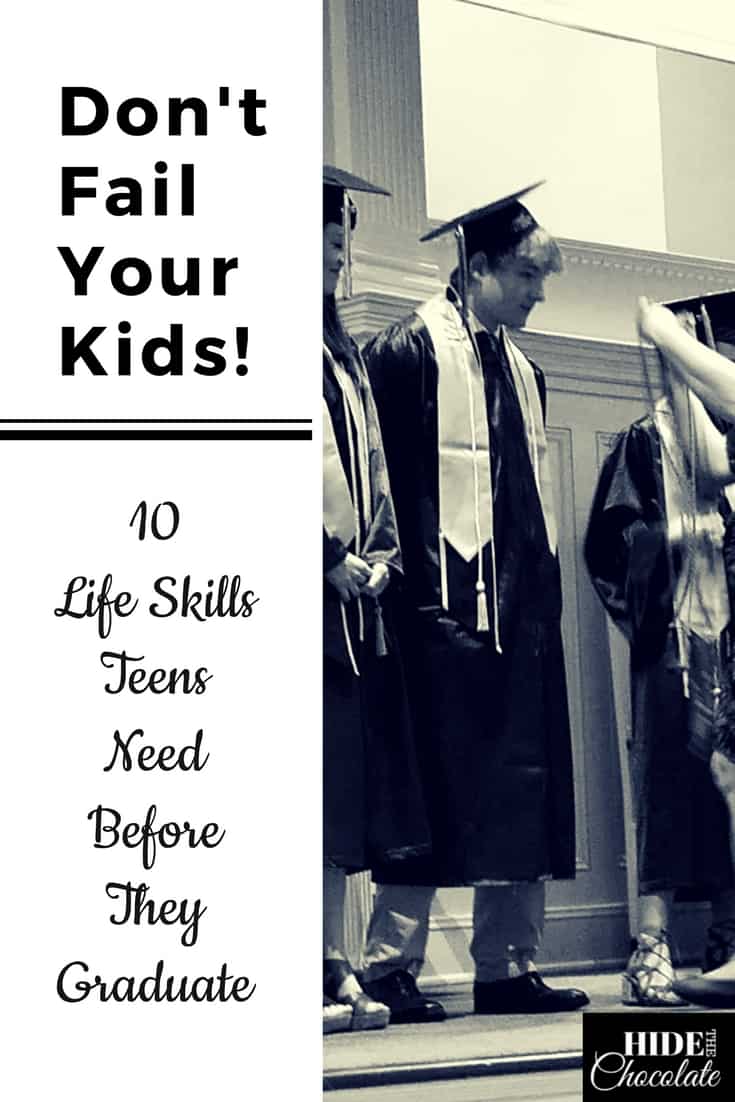 Would you prefer to listen to this post, rather than reading it?

10 #lifeskills for teens who will soon have to navigate the world without their parents. #ihsnet #homeschool Click To Tweet

1. Where To Put The Stamp

I’m not going to sugarcoat this. This one made me realize I may have failed him as a parent. While preparing his graduation invitations to mail, my son asked me which side of the envelope the stamp went on. Before I could answer, his 9-year-old sister showed him. (As an aside, she is homeschooled. He is not.)

Now, before you think my son actually addressed his invitations, I want to set the record straight. No, I pick my battles in this house and trying to get him to address invitations was not a battle I wanted to fight. But, I thought he could handle stuffing the invitations and putting the stamps on them. I obviously bargained on too much.

He did tell me later that he was questioning the side because his girlfriend had put the stamp on the left side of the envelope. So, it appears I’m not the only one failing my kid.

2. How To Not Get Salmonella

In the last few months, healthy eating has become a big issue for our oldest. He discovered that he wanted to take control of his eating habits and began a regimen of eating only chicken, rice, and broccoli or as he calls it, “The Grind.” Because the rest of us like a little variety in our meals, he began cooking all his meals.

One slight problem. He has no idea how to cook.

We discovered this when he cooked for his sister. In all the years of being around his mother and grandmother (who is an exceptional cook), he never noticed things we used to add, shall we say, flavor to our food. So he put a piece of frozen chicken in a pan and “grilled” it. Then he put his rice and broccoli in pots of water to cook. I’ve included the recipe he used below:

Place ingredients in pans and cook.

When the youngest cut into her chicken, she asked me if it should still be pink. This was a signal that perhaps I had failed him in yet another life skill.

In the last few months, his cooking has improved, and he even began to use a tiny bit of salt and garlic in his list of ingredients. However, he insists that foods on “The Grind” must be barely palatable in order to be healthy. I obviously still have work to do. Maybe I need to get him professional cooking help. 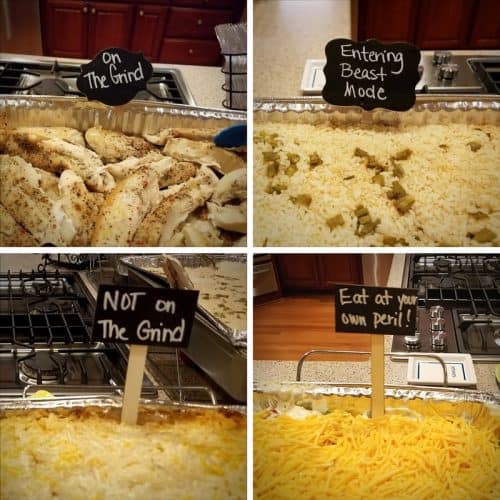 “The Grind” has become such a large part of our daily lives that we had to include food on “The Grind” in his graduation dinner (and a few that were not, for the rest of us).

3. How To Keep From Locking Up The Car’s Engine

As my child drove into the driveway recently, I noticed a loud clicking noise. It was so loud that I was surprised he hadn’t heard it. But, then I realized he probably didn’t know what the clicking noise meant. Usually, his dad takes care of all oil changes for the cars. Apparently, Dad had forgotten the oldest’s car recently, and my son didn’t have a clue he needed to change his oil – or even check it.

I quickly remedied this by sending him to the local oil change service place. If you are knowledgeable in all things car-related, feel free to teach your child how to change his oil. I, however, am not even remotely knowledgeable on car-related things, so I delegated this duty to the professionals. Either way, he learned a life skill. Just in our case, it was to know when to seek professional help.

4. How To Avoid Using Paper Plates The Rest of His Life

Last week my son told me he wouldn’t need dishes in his apartment at college. As I was trying to figure out how this would play out, he informed me that he would just use paper plates. Curiously I asked if the apartment came with a dishwasher. It does.

Here’s where I discovered that my obsessive controlling of loading the dishwasher had resulted in my child not knowing how to load it properly. Ok, so maybe he was frightened of trying based on my rants about the “correct way to load dishes.”

Regardless of where this little misstep in parenting arose from, I needed to correct it immediately. After a few loads of dishes, I came to the conclusion that he could learn this on his own by trial and error with his own dishwasher. I don’t need this kind of stress in my life.

5. How To Not Get Lost When Out of Town (or seriously, sometimes while in town)

During the most recent baseball season, the oldest would often drive to his out-of-town games with his fellow baseball players. Because the team would meet early to warm-up, my husband and I wouldn’t drive to the games until closer to game time. Most of these out-of-town games were in locations he had never driven to by himself. On these occasions, I would, invariably, receive the following text message.

“Mom, can you please add some data to my line for the GPS?”

This would highlight two important facts: 1. he had once again squandered his portion of our data plan, and 2. he had no clue how to navigate his way without Siri telling him where to go.

Learning to read a map is always a useful life skill for a teen, but even more so if your phone battery dies.

6. How To Clean Up After Disgusting People (or themselves)

Last weekend my son came home to tell me that he had to clean the bathrooms at work. He was thoroughly disgusted by this task (as he well should be), but he was able to complete it because I had taught him to clean his toilet.

Hallelujah!!! Do you hear bells ringing?

Yes, Finally!! I have prepared him in at least one life skill. Of course, this one was out of desperation. Boys are disgusting. Their bathrooms are worse than disgusting. I decided in the middle school years that this was a task he was taking over. I wasn’t going into that den of gruesome sights unless absolutely necessary.

7. How To Keep From Wearing Stinky Clothes (or going naked)

Since we’re on a roll with my impressive parenting, here’s another life skill I taught my child. At the age of 10, he learned to do his own laundry. At this point, I was slightly overwhelmed with the insane amount of laundry my family was producing, and I needed a little relief. So, I spent the summer teaching him to wash, dry, fold, and hang his clothing.

After a quick check of his room, I see that he may have forgotten the fold and hang part. But, I’m still counting this one as a win.

8. How To Not Have The Bank Call You

In our state, Personal Finance is a required course to graduate. That means that for 18 weeks my child was instructed in basic life skills like how to write a check and balance his checkbook. These are necessary skills for survival.

When he was 12, we opened a checking account in his name. This began his instruction in how not to overdraw his account and how to be responsible with his money. For the most part, it’s worked. With the exception of the questionable purchases he has made for PS4 related products, his account has remained relatively healthy. 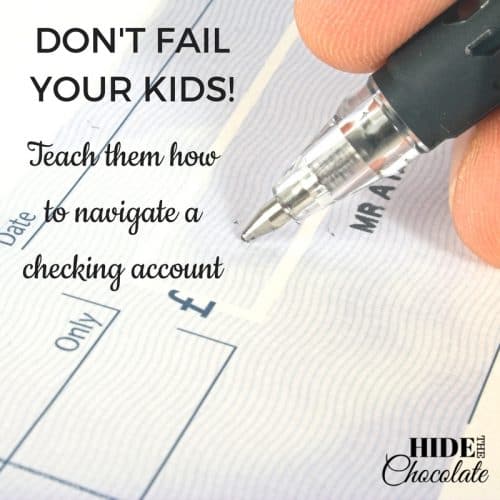 Unfortunately, not all teens have learned this essential life skill. His friend recently earned his first paycheck. Since he doesn’t have a checking account, his uncle offered to cash the check for him. All he needed to do was sign the check. It appears that without instruction, a teenager may just sign their name across the entire back of the check and not in the obvious signature box. Like I said before, I’m not the only one who has failed their kids.

9. How To Keep From Moving Back in with Their Parents

Last year our oldest started applying for jobs. His funds were getting dangerously low, and his parents had this ridiculous rule that he had to pay his own gas and anything else we didn’t feel was absolutely included in our parenting agreement (like Hoverboards). So, he set out to find gainful employment.

The day he sat down at the table and began asking me questions about his job application, I became aware of how little we may have taught him about the workforce and what skills he possessed. It turns out that making good grades and taking out the garbage are not skills that employers are generally seeking.

He was also somewhat surprised that he would not be getting a paycheck that would keep him in the lifestyle he was currently enjoying, especially when pesky deductions like FICA kept negatively affecting his net pay.

10. How To Function in the World Without Constant Parental Supervision

When my son got his driver’s license, a whole new world opened up to me. I no longer had to pile his pajama-clad sisters (and yoga pant-clad mother) in the van and deposit him at school. He could now drive himself to class.

I had the brilliant idea that if he was old enough to legally operate a motor vehicle, he could operate an alarm clock. I stopped yelling every 5 minutes for him to get up and get dressed for school.

He was now responsible for getting himself ready on time.

It was also during this period that we relaxed rules on time limits for his phone and his gaming devices.  We realized that if he was going to have to self-regulate himself in college, we needed to start these habits while he was still in our home and under our guidance. So, he not only became responsible for getting himself to appointments on time, but also for managing his sleep and his consumption of good or bad forms of media.

This is really the most important life skill a teen needs. Sometimes, we forget they are soon to be adults – granted immature adults with little common sense at times – but, adults still. We can’t expect them to self-regulate if they have never been given the opportunity to make choices for themselves. This is also the hardest life skill to teach because it requires letting go of control as a parent.

Hopefully, this is one life skill he has learned. Of course, he did get 35 tardies that school year, so there’s that.

What life skills have you failed to teach your teen?