“How did you get him to write? He never writes for me at home.”

This and a few other questions and comments similar to it were directed at me at our last enrichment classes. At first, I demurred because that’s what we Southerners do. Then I realized they were serious. They weren’t tossing compliments at me. They genuinely wanted to know how I was getting their reluctant writers to write for our book club and poetry teatime classes. These were moms who had desperately tried to get their children to write a paragraph and received stale, boring sentences, or nothing at all. They were baffled that those same little darlings were bringing pages and pages of writing to my classes.

First, I believe in the power of peer pressure. All those kids, each writing at the same time, is a significant influence. And, though it could explain writing a short poem during Poetry Teatime, it didn’t explain them going home and writing a twelve-page fairy tale for book club. So, I began to think of what and how I was teaching and why these kids who weren’t writing at home were suddenly writing at our enrichment group.

The answer I came up with? Freewriting.

Freewriting had inspired their reluctant writers to find their writing voices. 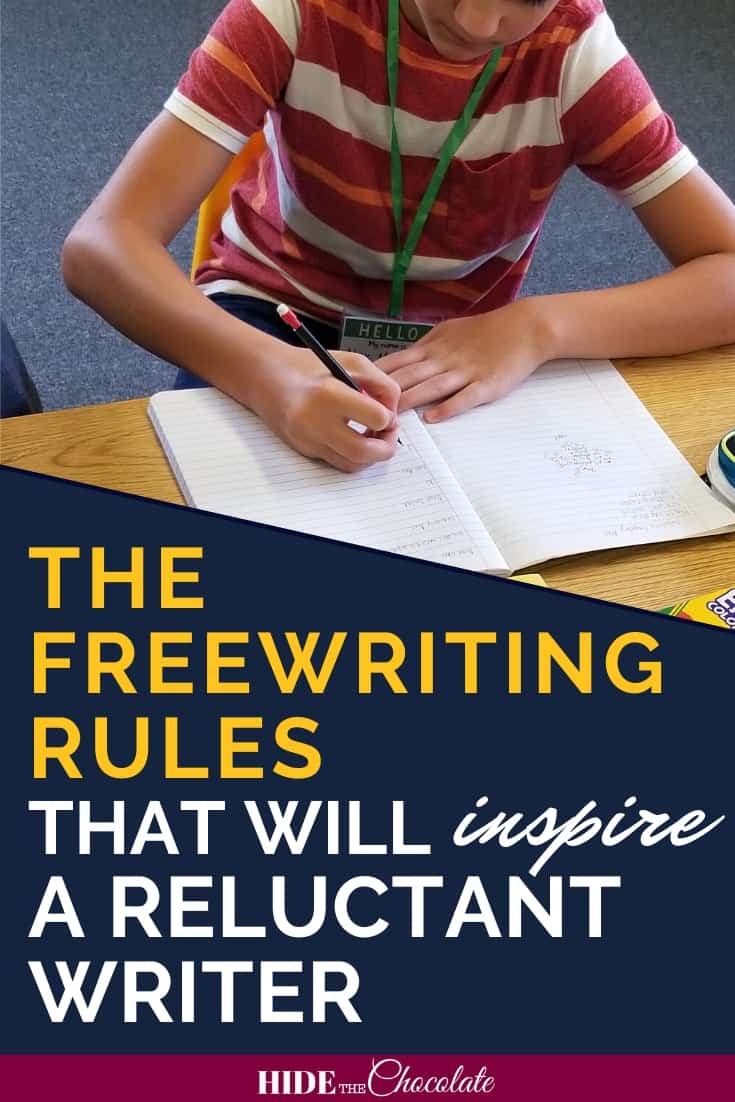 Years ago, I discovered the term freewriting while listening to a talk by Julie Bogart of Brave Writer. I was fascinated at this way of writing mainly because I had a reluctant writer in my home, but also because it was similar to how I had learned to write.

I had several teachers over the years who inspired me to write stories, poems, and essays. The ones who were able to get me to explore my thoughts and feelings were the ones who were able to get the best writing from me. They didn’t overly critique my spelling, grammar, or general form (though I’m sure they did point out those things). These teachers focused on the content of what I was writing. They asked me questions and explored my train of thought. Their red marks on my page encouraged my descriptions and bolstered my confidence. And, though I had other teachers who were highly critical of my form, these teachers were the ones I learned from and eventually helped me to discover my writing voice.

The principals of writing that I learned from these amazing teachers were those that Julie was describing. And, though I began by following her rules on freewriting, over the years, I have made them my own.

Writing can be extremely intimidating for some. This is why it’s important for the parent to not critique papers for grammar.  It is just as important for the student not to stop writing to fix a misspelled word or to add a comma.

The writing process is most like a brain dump. All the words need to get to the paper as quickly as possible before they are lost. Stopping to fix an error can cause the student to lose their train of thought and end the freewriting process.

That’s why I tell my students at the beginning of a freewrite that we don’t care about grammar or spelling. We are only interested in original thought. That statement is often met with cheers.

Think about that, mamas. Our kids are desperately asking us to give them permission to spill their thoughts on paper without being held back by the “rules.” It is much harder to express our inner feelings and write them down than it is to learn grammar and spelling.

But, before you think I’ve lost my mind. I don’t completely give up on all grammar rules. I’m not a barbarian, after all. But we will get to that later. For now, put down the red pen and get to writing.

The idea of having to write a four-page paper on a given subject can cause many students to break down in tears. It’s just the thought of having to write all those words that causes some kids to type up a few sentences in a 20 point font that is triple-spaced. (I’m not kidding. One parent related this to me from her experiences.) So, I don’t assign any particular length of writing. I tell my students that they are finished when the story is told. That might mean I get a one-paragraph paper. But, more often than not, I get multiple pages because the writer realizes that their story has to come to a conclusion.

Freewriting doesn’t have a page number, but it does have a timer. We start with a ten-minute timer (for the younger crowd or very reluctant, you can start with five minutes). I set the timer and tell the children that they only have to write for ten minutes – not a minute more. But, in those ten minutes, they have to write continuously. They can write anything they want, even their name fifty times, but they have to write.

The first few times we do this exercise, I get several papers filled with commentary on why they don’t want to write for ten minutes and how they will never get through ten minutes of writing. These are my favorites. Every student who has ever written a freewrite on not wanting to write a freewrite has eventually written an imaginative and detailed story. We all have a story to tell. It just takes a bit more prodding for some of us.

As writers, we are sharing our inner thoughts, and it can be scary to let someone judge those thoughts. That’s why sharing their freewrite is entirely optional. Initially, my middle child refused to share her writing with me at all. She would fold over the page in her journal and staple it closed, or she would put it in a sealed envelope. I know she did the writing, but it wasn’t necessary for me to read it.

Over the years, she began to allow me to read her projects, though she has still yet to read a story to me. And that’s okay because she is an amazing writer. Unfortunately, it takes a lot to build up her self-confidence, so allowing her to keep her writing private and only share when she wants is a boost for her.

But what about Grammar?

For those of you who are stressing out about the lack of grammar and spelling instruction, it’s going to be okay. I am not advocating a no-grammar lifestyle. You can’t just go throwing commas around willy nilly after all. What I am suggesting is that there is a time and place for everything.

This is not the time or place for grammar instruction. You have plenty of time in your child’s educational career to teach them the proper way to construct a sentence or how to use an adverbial phrase. But, that should be at a separate time from freewriting.

Freewriting should be fun and creative, not critical. As a homeschool parent, that may mean having to curb your enthusiasm with the correction and focus more on encouragement.

Ask leading questions to help your student develop their story. Find parts of the story that are particularly interesting or descriptive and point them out. All writers of all ages need to be encouraged.

Help your children to see the value of freewriting, and they won’t be reluctant writers anymore.

Do you know the 5 basic tools to start freewriting? This article explains them in detail. 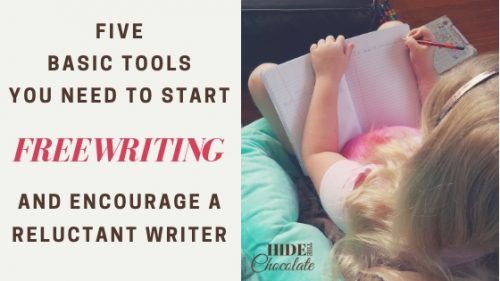