Take a moment and look at your hands.

Some show youth. Some show age. Some show scars from accidents or manual labor.

Now, reach to the person next to you and touch their hand.

That hand is no longer old, scarred, young, soft, or rough. It is warm. It is consoling. It is a small measure of love and caring. It creates a bond that stretches the divide between disagreements and anger.

Hands, not eyes, are windows to the soul. 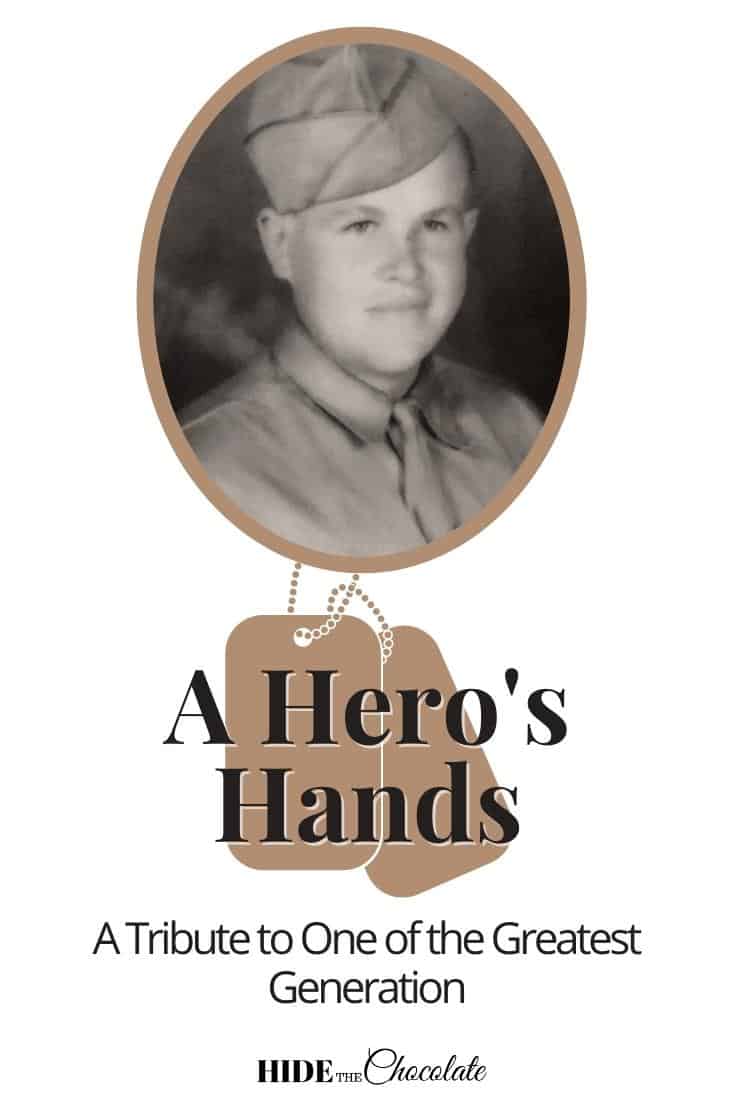 Nearly a century ago, hands brought my grandfather into this world and to his family. He was not born into great riches or celebrity. He wasn’t born to nobility or had his name engraved in the pages of history. In fact, his birth was unheralded, and the exact date became a 99-year debate (or 98 depending on who you ask).

What we do know is that this unassuming child would be born at the end of a global pandemic and into what would become the Great Depression. He would have to struggle for everything he had, along with all the other poor farmers of the nation. He wouldn’t have a phone, television, car, or even a radio for many years. And what he ate, his family grew or raised. The world was different then, and it was not unusual to be hungry and left with basic needs unfulfilled.

More than that, though, he would know the pain of losing a mother and watching her be buried on his 10th birthday. He would know the loss of having a father who chose another family over his own. And he would know what it felt like to be the one who never quite fit into his family.

For some, that would mean a life of self-pity and anger.

For him, it would mean that he would become one of the “Greatest Generation” – a man of honor, integrity, strength, and, most importantly, love. He would become a husband who loved his beautiful wife for nearly 70 years and never forgot his vows to protect her in “sickness and in health.” A father who gave his children what he could never imagine having as a child – a stable family, an education, and a promise that he would always support them. A grandfather (and great-grandfather) who always had patience and time for his “babies.” 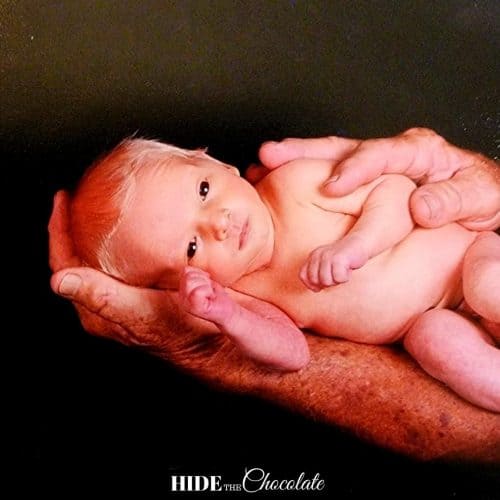 Seventy-six years after his birth, he would hold his tiny first great-grandson in his hands. He was so worried that his hands would be too rough for the premature little boy. He was embarrassed at what his fingers would look like to others. But, what the rest of us saw in this picture was a life that was filled with hard work and dedication. His hands were rough. They weren’t beautiful. They were scarred.

They were also gentle, caring, and loving.

His hands were the window to his soul.

In 1942, just before his 18th birthday, he joined the military. He knew that he needed to be part of something bigger, but he didn’t know exactly what that meant at the time. He often reflected on his time in the military – always leaving out the cruelty and laughing about the absurdities that came with a bunch of kids trying to figure out who they were in the trenches of a horrific war.

Most of his stories were funny quips, like learning to ride a motorcycle or the first time he saw a television while stationed in Chicago. And, there were the times he and his outfit would walk through the cities they had liberated and give their candy rations to the children.

He told stories of learning to drive a tank on his own because the general told him he had to teach “the boys” to drive a tank the next day and nearly suffocating in his sleeping bag because he couldn’t figure out how to get out of it.

But there were also stories about spending nights in holes filled with water in the frigid European winter, keeping his head down to avoid being sliced into by shrapnel, and watching his “buddies” die. Almost every story he told, we laughed through them, but we knew he would end them with a sad note on how that buddy of his didn’t make it home.

It was just a fact of the war. A fact he learned to live with but never forgot. Many men lived on for decades in his memory and in the stories he told us as grandchildren.

War scars your hands and your heart. It toughens the skin and makes it rough to the touch. It opens wounds that take too long to heal. It left him with hands that would never be the same.

Grandaddy felt the pain of the people he saw in foreign lands. He understood why the German people did what they had to do, but he never forgave the men he saw abuse others. He made a point to remind us that the Holocaust was real, that there were people who could and would do such things again if we let them, and that we should always stand up for those weaker than ourselves.

But, he also was a man of peace. The war gave him a perspective none of us know today. He was one of those who fought against a great evil. He saw what fascism looks like firsthand, and yet he never raised his hand in anger.

He came home from the war on a furlough and was not returned to his beloved “boys” as they crossed the Rhine River and overtook Berlin. His battalion liberated the death camps without him, and he always regretted not being there to help.

The commander had sent him home for 30 days because he was the first in his unit to receive a medal, the bronze star. A medal he didn’t talk about much. A medal that he never told the reason it was given to him. I suspect it involved an act of bravery that he felt was overrated because he saw it as his duty and not heroism. Or perhaps he felt guilty for being one of the survivors. I can never say for sure, and so it will remain a secret he takes with him.

The war aged his hands. It gave them scars that would stay with him for a lifetime. Until the day he died, he could relate the stories of his friends, the places he visited, the lives that touched him, and the horrors that brought him to his knees.

The war didn’t end him, and it didn’t break him.

He came home and met the love of his life, my grandmother, Emma Irene Woodlee. No, that wasn’t her married name, and no, they weren’t closely related, at least not as far as we could research. She became his reason to become a better man. She introduced him to his Savior, and he spent his remaining decades devoted to His service.

He settled into the life of husband and father. He found hope in the forgiveness of Jesus Christ, and he became a man who learned that scars are what make you the person you are. That embracing them and growing are far superior to wishing they were not there.

This was a man who was the ultimate portrayal of sacrificing for your family. He worked long, hard hours, and when he couldn’t find work at home, he drove 600 miles one way to work in Detroit. He told stories of coming home every weekend to visit his family, getting very little sleep, and then driving back to work the next week.

Not having a traditional family made him strive to have the family he wanted. Not having a father made him want to be a great father.

He raised cattle, pigs, the random goat, and four children. He never stopped working, and that’s probably why he was the healthiest man I ever knew. In his 80s, he was run over by a bulldozer, and his military skills kicked in to save his life as he burrowed into the dirt as he did in the holes of France. In his 90s, doctors marveled over how active he was. He never moved from his home, and he never stopped being a farmer. It wasn’t a vocation but a lifestyle.

And nothing compared to his wit and wisdom.

He would make you laugh and make you cry. His humor was soft and gracious. His wisdom was that of a man who had lived a life for his Creator. His Bible was worn, and when the next global pandemic came along, he discovered the endless number of sermons and studies he could watch on his computer. He was a man of God. A man like David. A man I know who is with his beloved Irene, waiting for us to join him. 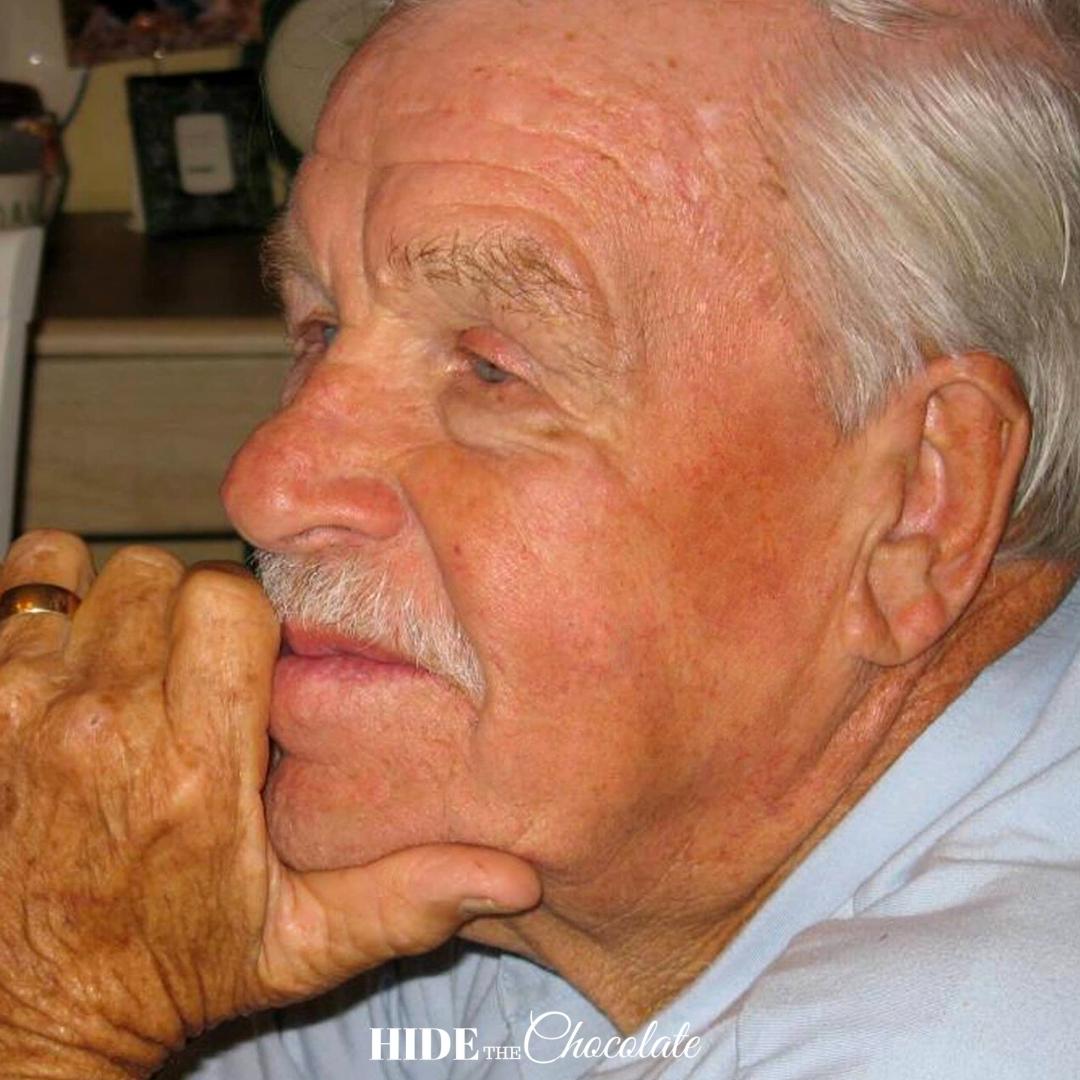 I could tell you endless stories about this man, his humor, his humility, his true awesomeness. But, I would be here for days.

He was many things to many people, and I can’t possibly wrap up an entire lifetime in one eulogy. I can’t even share a fraction of what it means to have known Brownie Woodlee.

I won’t waste your time with platitudes. He was not a man who would have appreciated that. In fact, I’m pretty sure he wouldn’t appreciate all this attention being made about him now.

Most remember him as caring, loving, kind, generous, selfless, hardworking, devoted, and, above all, a Christian. These are attributes he showed daily.

He was also the strongest man I have ever known. He never gave in to anger or resentment. He never fell victim to self-pity. He lived his life to the fullest.

One time he said that he didn’t know why God was gracious enough to give him so long a life.

He changed the world. He made it better and brighter and full of an energy that can’t be replaced. He shared his love of God with everyone he met, and I know of no one who had a bad word to say about him.

He lived nearly a century so that we could all get to experience the phenomenal man he was, if even for just a short while. His hands touched us all in love, comfort, and compassion.

As his heart began to fail him, his hands became weaker. They showed the fragility of life, and we all knew he wouldn’t live forever (though we secretly hoped he might).  And, on Halloween, the day he loved to greet his grandchildren and great-grandchildren with candy and hugs, his hands stilled. His body was tired.

Last year he told me that when he was sailing home from Germany, they announced President Roosevelt had died. When asked if he was scared, he said, “Well, of course. Our leader was gone. We didn’t know how we would go on.”

Today, I understand that sentiment. It’s hard to know how our family will go on without him. But the answer is simple.

Look to his hands.

Be the comfort someone needs. Be the strength that keeps your family together. Be the sacrifice your loved ones hope for.

Hold someone’s hand and know that it’s the quiet, strong, humble ones that make the biggest impact on the world.