On a snowy day in January of 1986, I was sitting in my parents’ basement watching television. I can’t remember if we were out of school because of snow or because of the flu, but I was enjoying laying around all morning in my pajamas surfing channels. Then around 10:30 in the morning, my lazy day dramatically changed.

My best friend called, and we were watching the Space Shuttle Challenger launch while chatting about all the middle school gossip. I’ll never forget the moment the explosion lit up the TV. I was stunned. My best friend was stunned. A nation of students who were eagerly watching the first teacher be launched into space was stunned. We talked about that moment for weeks afterward, and it will always be imprinted in my mind. But, it didn’t dampen my love for space or fascination in the space program. 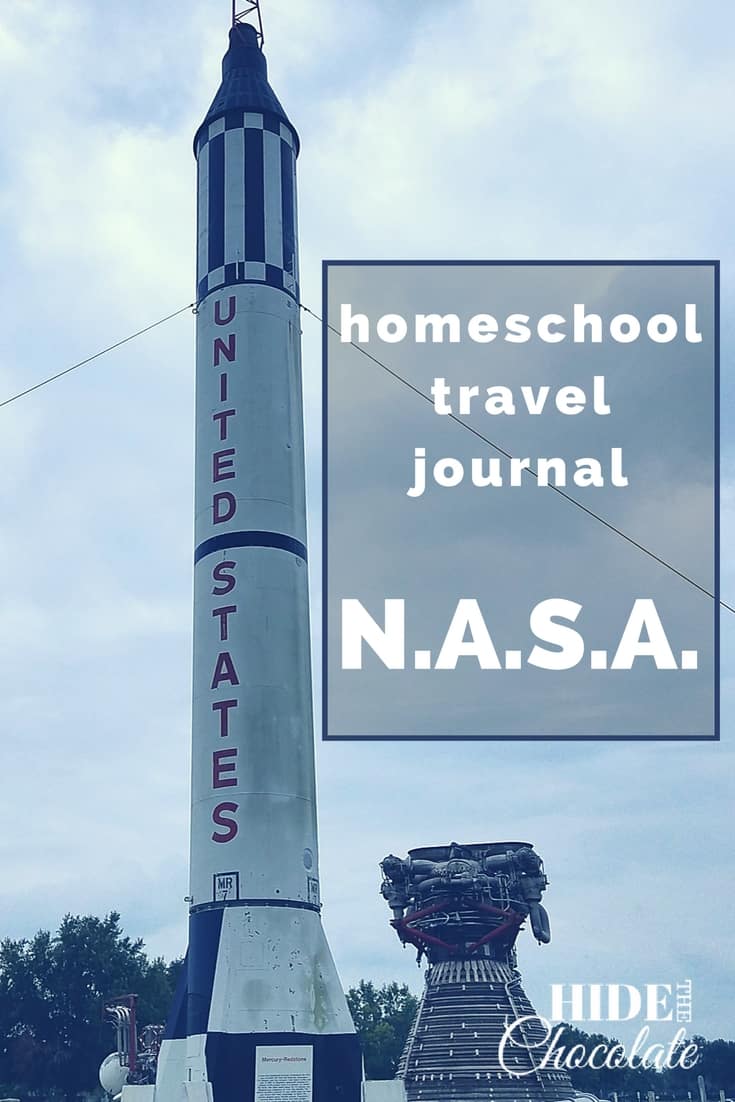 As my love for reading grew, I became a huge Sci-Fi fan. I have always had a fascination with movies and television programs that were related to space travel. I’ve watched the entire series of From the Earth to the Moon

more than once, not to mention Apollo 13

and The Right Stuff

. So, when we had the chance to make a quick stop in Houston, I knew we had to visit Johnson Space Center. I became absolutely giddy with excitement about FieldSchooling at NASA.

Studying for Our Trip

in the car during the (extremely) long drive. However, I have grand plans of doing a space unit study when we get home. The girls and I are also excited to start the new Art in Space tutorial by ChalkPastel in the next few days.

Since our pit stop in Houston wasn’t originally a part of our travel plans, we made a quick reservation at the Boardwalk Inn at Kemah. I had no idea what to expect, so we were pleasantly surprised to find I had booked us into an adorable hotel reminiscent of Yacht and Beach at Disney World. As it turns out, Kemah Boardwalk is a miniature amusement park similar to Coney Island. If I had realized that we were spending the night in an amusement park, I would have scheduled time in for a few roller coaster rides. But, as it was, we didn’t have time to explore the area. We will have to add that to our next trip to Texas.

Before we arrived, I scheduled Tram and Orbiter Tour Times through Space Center Houston’s website. Since it was summer, we were concerned about large crowds. Much to our surprise, the crowds were low. The tour guides told us that the heavier crowds were on the weekends. The scheduled times were nice in that we didn’t have to wait in lines and there weren’t large crowds at the exhibits.

There are two tram tours available: red and blue. Both tours will take you next door to Johnson Space Center and end with an optional tour of Rocket Park and the HUGE Saturn V Rocket. An audio tour is available for both tours and is the same. 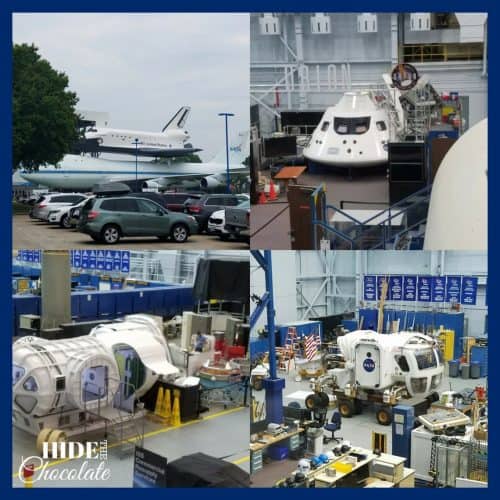 The red tour takes guests on a tour of the Vehicle Mock-Up Facility. Here you can look down onto the labs from a glassed-in catwalk. The building is approximately two football fields long. One-third of the floor holds a replica of the international space station. Another portion has working models of the new Orion space model, the space rovers, Valkyrie the robot, the Canada Arm and much more. As we were touring above, we could look down on Space Center employees working on the models. Unfortunately, there were no astronauts training on the day we were there. This tour also takes you to the memorial area for the Apollo 1, Shuttle Challenger and Shuttle Columbia crews. 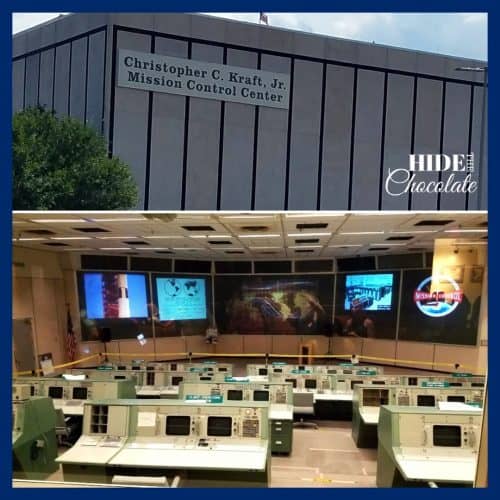 The blue tour takes guests to historic mission control. This tour was the highlight of my trip. To sit in the seats that the astronauts’ wives sat in as they watched the launch was surreal. We looked out on the command center that was used for forty years on historic missions to the moon. We were seated in the rooms where the first words from the moon were broadcast, “Houston, Tranquility Base here. The Eagle has landed,” and where the first steps on the moon were witnessed. The tour guide for this portion of the tour was beyond my expectations. He was personable, friendly, humorous, and sincere. He made you feel like you were in a place of wonder and excitement. 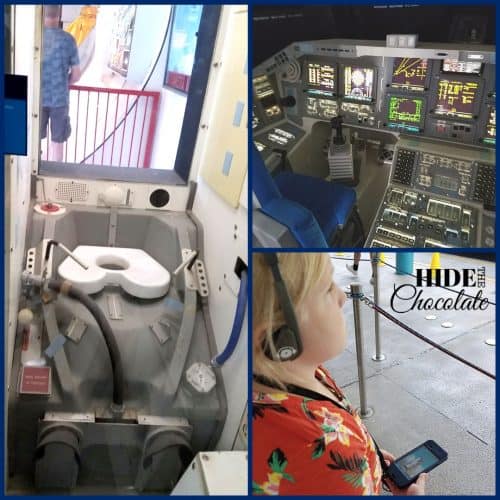 The Shuttle Independence, a mock-up shuttle, is sitting on top of the NASA 905 shuttle carrier aircraft that was used to transport the shuttle. My kids were most impressed and slightly disgusted by the “bathroom facilities.”

I would suggest ordering the audio tour for this portion of your visit. Former astronauts narrate as you walk through the different levels of the shuttle. After touring the shuttle, you can tour the Boeing 747 airplane which was a commercial plane that was converted into use for NASA. Here you can work with different models and learn how the engineers came up with the plan to use the plane to transport the shuttle.

Fieldschooling at NASA with Kids 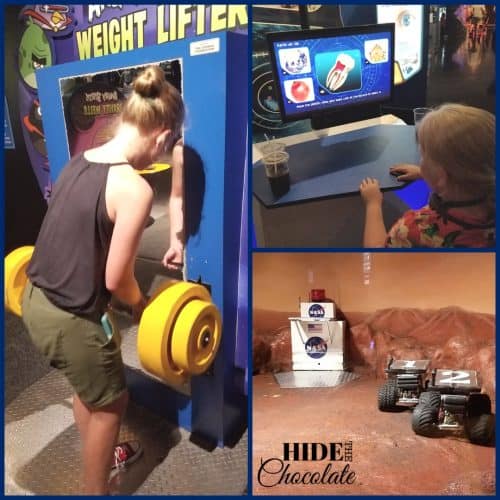 My children’s favorite parts of Space Center Houston were the interactive exhibits in the Space Center Plaza. These change periodically but are similar to the exhibits in Epcot’s Innoventions. They loved flying in the model ships the best, even if they did make Mom a little dizzy.

Touring NASA as a Former-Astronaut-Wanna-be

To be in a place where history was made was beyond amazing. #ihsnet #homeschool Click To Tweet

So many memories were brought to the surface from touring the Space Center. I felt in awe as I walked the historic AND working halls of NASA. The campus feel of the space center was opening and welcome. To be in a place where history was not only made but was the beginning of the technology we love was beyond amazing. The ingenuity and brilliance of the people who worked to bring our space program to life is evident in the tiny laptop I’m using to type this article. These intrepid engineers used computers that had the memory of 7 cell phone snapshots. They couldn’t rely on mathematical equations that were performed by computers. They had to use their own intelligence and creativity to send these brave men and women hurtling into space and back to Earth again. It is truly a testament to these engineers that they were able to do this safely hundreds of times.

I had such a hard time finding the perfect travel journal, that I created my own, the Homeschool Travel Journal. Sign up for access to travel journal pages for Waco that you can add to your journal. 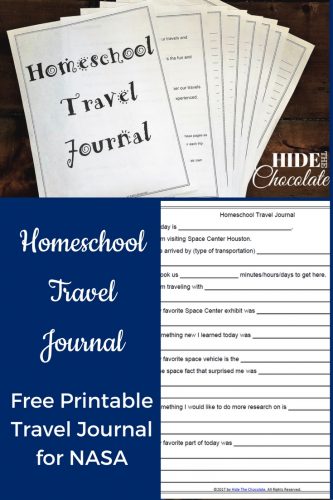 « Plan to Play: How To Easily Add Fun To Your Homeschool Day
Homeschool Travel Journal: San Antonio and the Alamo »